What is a Loft? 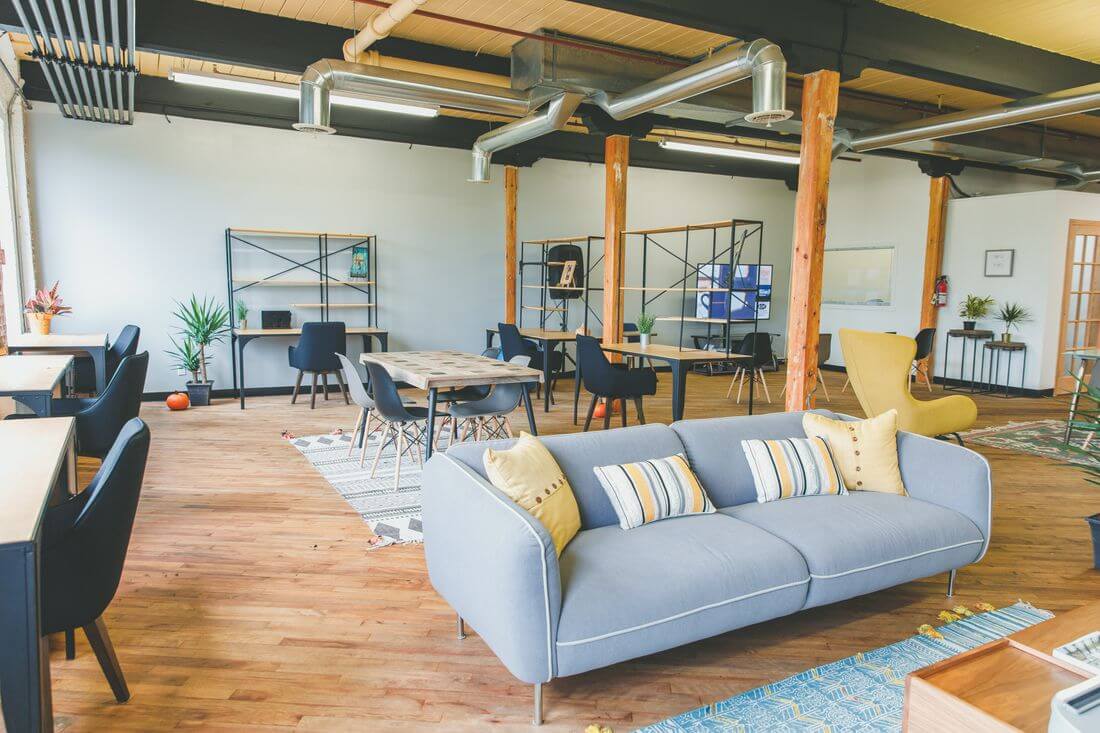 What is a Loft?

Probably each of us has met the term Loft, loft spaces, loft apartments, loft offices, loft furniture or industrial spaces at least once. Most often, these terms can be found in developers’ offers and interior design guides. However, it is worth answering the question of what are the determinants of Lofts and from where this term came to Poland and what exactly it means.

The creation of such investments in our country a little later than in other places in the world is connected with the fact that the Polish economy has been based on the industry for much longer than in Western European countries or the United States. Large post-industrial spaces, dominated by the road, metal and concrete were clearly associated with dirt, disorder and lack of harmony. However, the perception of their potential by investors has given old factories, warehouses and other industrial facilities a new soul. It is undeniable that lofts are more and more often part of our culture. They set trends in architecture and art. They bring back new life to objects that have been falling into ruin and oblivion so far.

The word Loft by the dictionary means a room or space directly under the roof of a house or other building used for residential or commercial purposes.

Another meaning of the word is a large, open area in a warehouse, factory or other large building that has been transformed into a living space.

In the United States, the term Loft is used to describe the upper storey in a building – directly under the roof. However, in the United Kingdom, it is nothing more than a storage space under a roof, to which a ladder usually leads.

However, loft as space has many uses. These include offices, residential spaces, film and photo studios, dance clubs, gyms, CrossFit, retail stores and much more. It is up to the owner or tenant to adapt and adapt their space too. 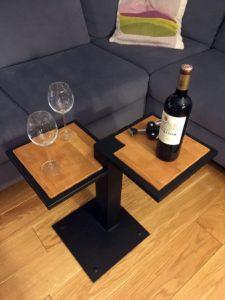 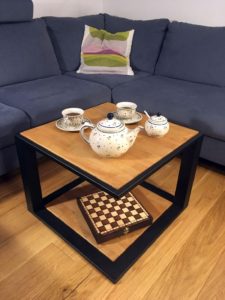 A loft apartment is a large, flexible, open space, usually without internal walls (outside the bathroom), converted for residential purposes. It has previously been used for industrial purposes. Such apartments are characterized by high ceilings, exposed pipes, ceiling beams and huge spacious windows.

A loft office is a vast space designed in an industrial style, most often including open space and glazed metal loft walls that separate individual rooms.

The ideal example of a loft office in Poland is: Studio HBO Poland, which we had the pleasure to co-create. We have comprehensively made and installed there, among others:

(you can read more about this project in our portfolio).

Other examples of facilities that include loft offices are Centrum Praskie Koneser or Hala Koszyki. 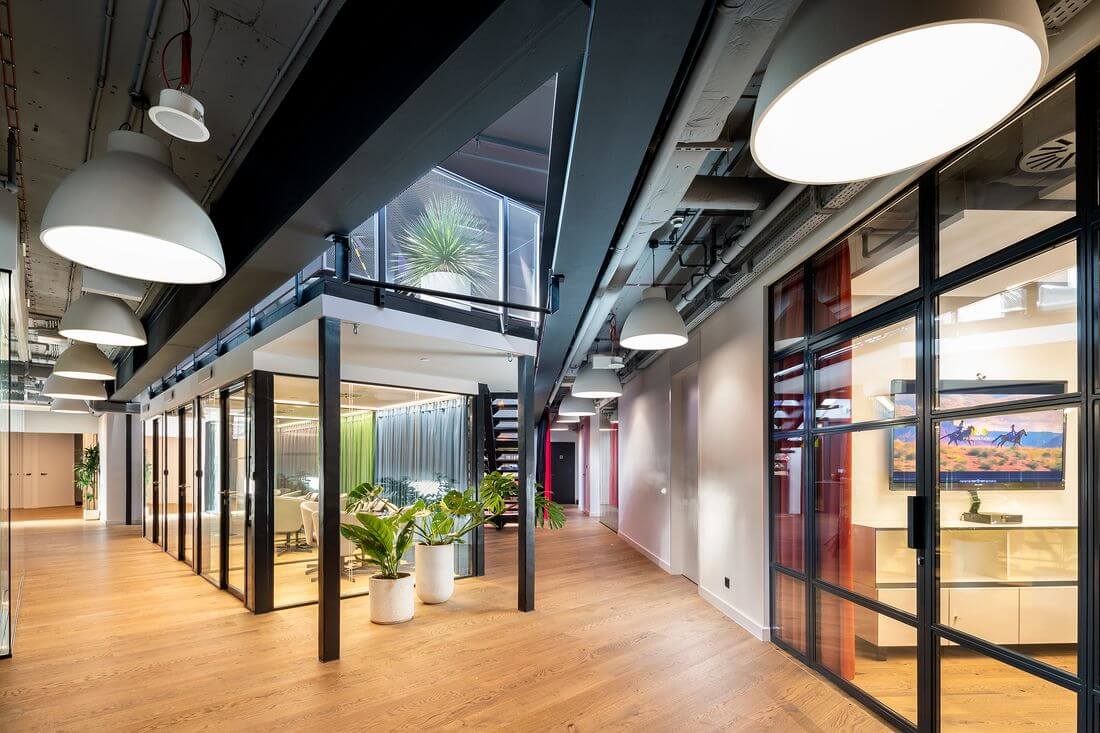 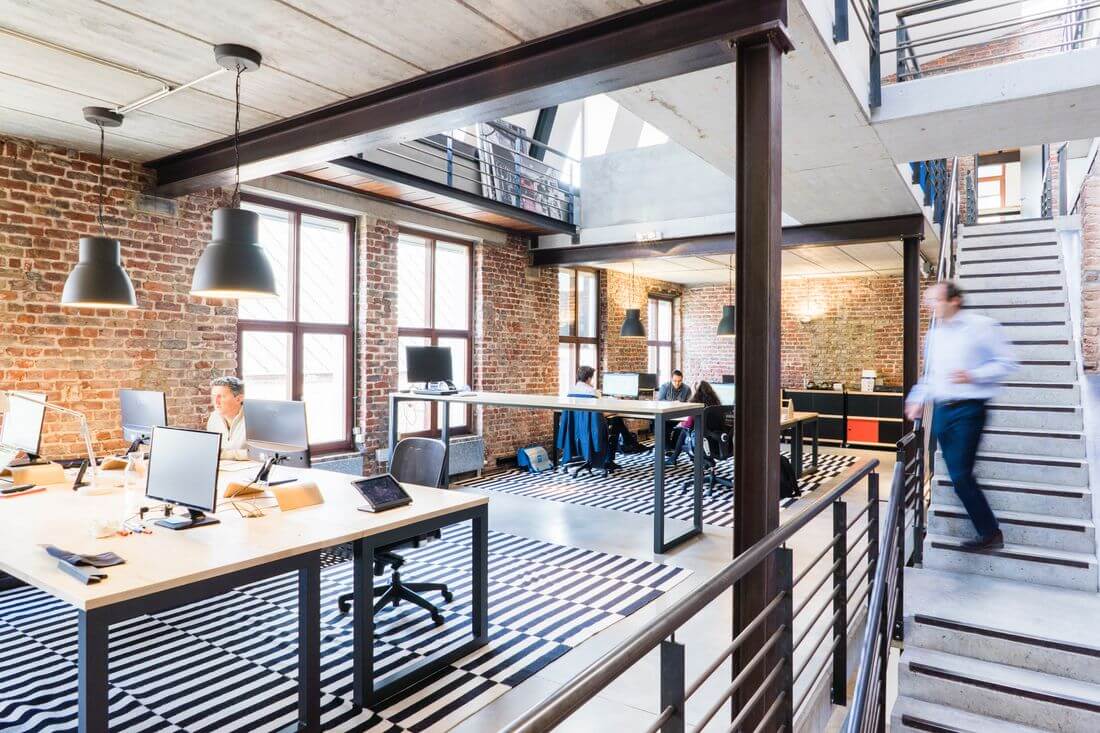 Loft apartments can now be found in many places around the world, but New York is considered the cradle of this style. This is especially true of places like Manhattan (Soho, Tribeca, Meatpacking District) or Brooklyn (Bushwick, Williamsburg).

There is a slight difference of opinion as to where the hard lofts originally appeared in New York. However, most people agree that they first appeared in the late 1960s and early 1970s in Soho. It is a historically and architecturally coherent area bordering Houston, West Broadway, Canal, and Lafayette – running from north to east. It was already quite a forgotten area, called industrial wasteland and not enjoying a good reputation. 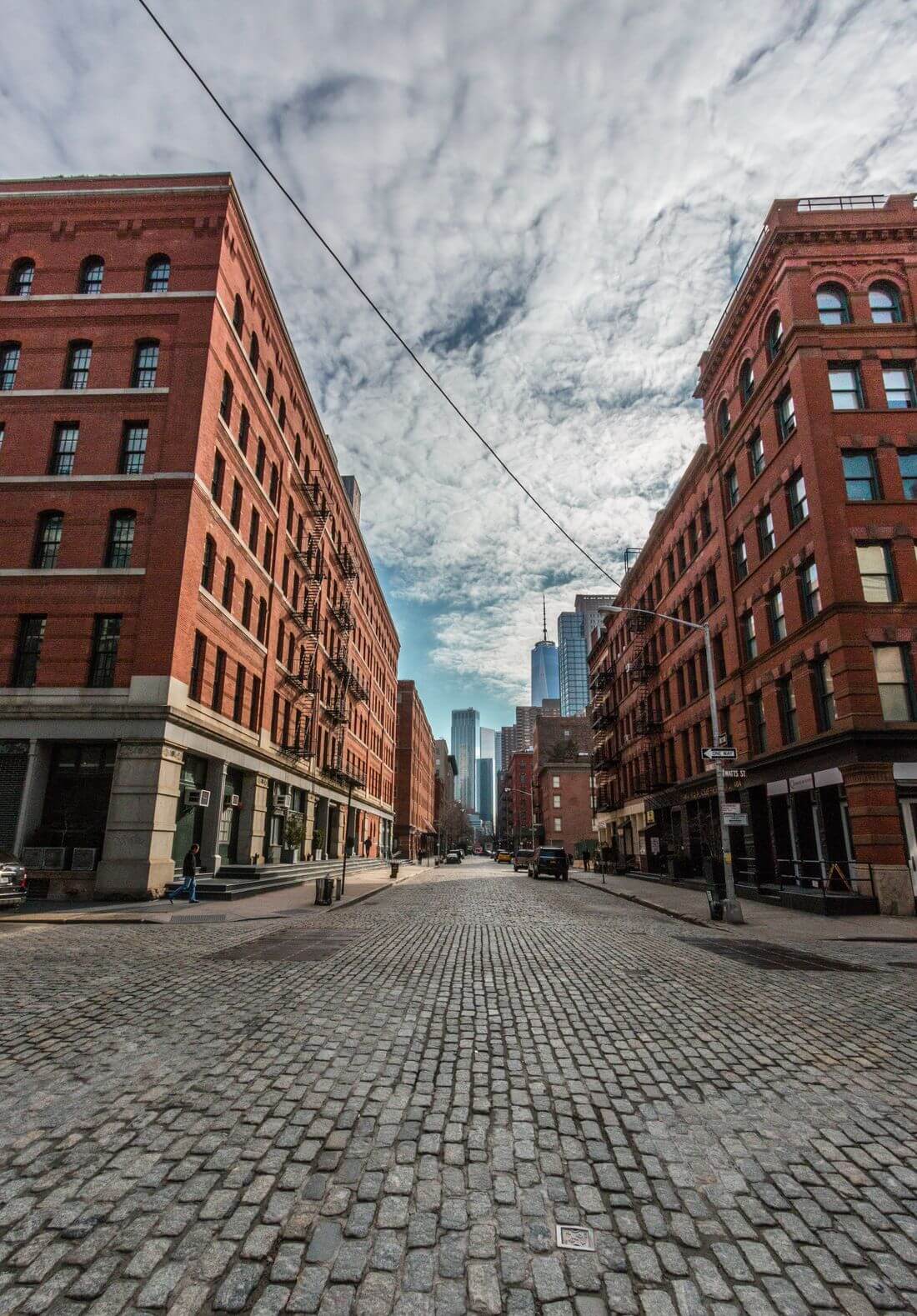 The first lofts were made in former factories and warehouses

Various types of artists and artisans struggling with financial problems looked for space to create and live (often illegally and secretly). This made it easier to understand why they started setting up their lofts in old factories and warehouses. They filled in and developed the gap that soon became the driving force behind these places.

Initially, they were popular mainly among artists, but now they find recognition among an ever wider audience. After some time, as the previously deserted districts became more and more populated, outsiders could see how amazing the designs of many of the lofts there were. People started to realize what can be done with these places – if professional designers and architects began to deal with them.

Housing and loft spaces are often one of the elements of urban initiatives for the resurrection of old industrial sites. Revitalised objects take on a new meaning. They house photographic studios, art galleries, restaurants and many others. However, it should be remembered that the definition of a loft apartment will also depend on the place and region where we find ourselves.

Raising the status of these places by revitalizing them and giving them new life is one of the patterns that we observe in contemporary architecture and space design. One of the first examples of pioneering revitalizations of industrial sites and transforming them into Lofty is the Manhattan Meatpacking District in New York City.

The trend of artists setting up loft houses has become so popular that the so-called Loft Law was passed in 1982 in New York. The document aims to protect people living in commercial buildings by granting them certain rights. It also imposes a number of requirements on the owners of the buildings. The law also established a special New York City Loft Board and a Loft Board.

The purpose of these bodies is to regulate the transformation of former commercial buildings, factories and warehouses into safe residential lofts that meet, among other things, fire safety requirements and regulations. Another condition is that the premises must have at least one window facing the streets, a legal yard, courtyard or garden. The property must also have a minimum of 400 square feet. It must not be located in a basement, basement or industrial area.

The arrangement of the lofts constantly creates excellent opportunities and challenges. Some owners prefer to leave vast open spaces and install such elements as large industrial shelves, a wide massive wooden table, an oblong sofa etc. Others, especially families, appreciate the separation of individual rooms and places with loft walls or temporary sliding screens, and they do not lose the sense of openness.

Loft flats are also premises with stairs leading to the upper storey – a mezzanine. It is partially uncovered and overlooks the central open space (living space). Most often there is a bedroom, although it may be an office space, a living room or even a bathroom. In the United States, this type of lofts is called California Loft Apartments. It is dated to the 1970s.

Mezzanines (half-floors) for safety purposes have balustrades made of metal or wood. Many people appreciate the open character of this place. However, new trends indicate that to maintain privacy even in this place, it is worth to install a loft wall there to cover this place. This type of lofts sometimes also takes the form of a two-level apartment.

The mezzanine is usually accessed using a staircase or spiral staircase, depending on the arrangement of the lofts. However, people can also enter the mezzanine, or just a ladder – if this place only serves as bedrooms.

Hard Loft are former industrial buildings that have been transformed and adapted for residential and office purposes. These include old 100-year-old warehouses or factories. They are spaces with exposed brick walls, wooden beams and majestically large windows. An example of such a facility is Broadview Lofts in Toronto. The former warehouse was converted into a residential building. It is located on Broadview Avenue 68 south of Queen Street East. The building was erected in 1914 and served as a warehouse. In 2003 it was converted, and the investor gave it a residential function and added two more floors to it. Thanks to the revitalization, many historical elements such as the water tower on the roof and cage elevators were preserved and saved.

Hala Koszyki – a hybrid of hard lofts and soft lofts – is a new investment built on the pattern of the original building by preserving and revitalizing historical elements.

Soft Loft is an entirely new built residential or commercial building, which is reminiscent of old industrial buildings. These spaces are characterized by high ceilings, large windows and the use of brick and cement in a visible way. They are characterized by more everyday friendly solutions, with a more refined look. Loft built entirely from scratch gives architects a lot of freedom. For example, in the careful design of electrical, plumbing and heating installations. And all other necessary installations that were not needed in historic buildings.

On the Polish market a very interesting example of commercial hard lofts is Manufaktura in Łódź. The former textile factory of Izrael Poznański has been revitalized and transformed into a shopping center. It is an over 100-year-old object, which was built at the end of the 19th century, in the years 1872-1892 according to the design of Hilary Majewski. At that time, it was the largest factory in the Kalisz-Mazovian industrial district.

The historic brick walls and facades now contrast with the glass entrance façade of the shopping centre building and extend around the square. It is a public space where various cultural and sports events take place.

It is estimated that the entire investment cost about 200 million euro. It is worth mentioning that in 2015 the spinning mill and the gate of the factory were recognized as monuments of history.

An ideal example of a Soft Loft building is Woronicza Qbik. The investment is Warsaw’s first residential project designed in this style. It is a building built in the industrial style of traditional lofts but from scratch.

Although it is a new facility, it was built in a place where after the Second World War the authorities decided to locate electronic production facilities. So it was an industrial district. In the 90s of the 20th century, the area started to change its character. The first office complex in Poland was built there. By 2016 a total of 75 office buildings were erected there.

Along with the dynamic development of this part of Mokotów, the expansion of public transport infrastructure did not follow. This ultimately led to large traffic jams, communication difficulties and insufficient parking spaces. This place gained the humorous name of Mordor – a dark land from Tolkien’s story.

Woronicza Qbik is a facade in more than 1/3 made of glass.

Large glass facades and windows, metal, concrete and wood dominate the project. At the highest point, the investment has 11 floors. The building is characterized by typical post-industrial architecture.

Residents have at their disposal a patio with a playground, fitness and gym. The building has 519 underground parking spaces. A total of 35 550 m3 of concrete was used for the construction.